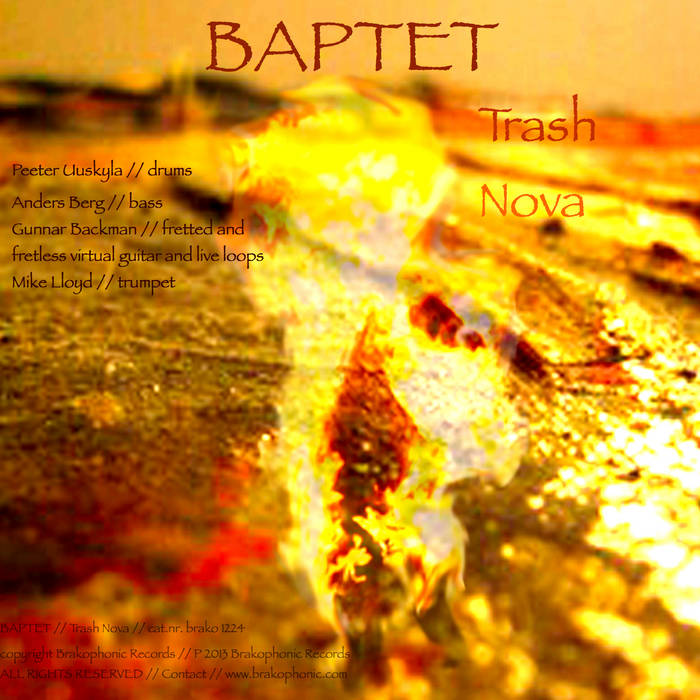 Chris Reid " Sounds like miles Davis in the Bitches Brew or even Aura period but on acid. Cool."
Producer in Toronto, Canada

Baptet - Trash Nova (Brakophonic, 2014) ****?By Stefan Wood
Baptet is a Swedish jazz rock group whose music embraces the spirit of 70s era Miles Davis sound, with prog rock sensibilities. Gunnar Backman, producer and composer, plays guitars and electronics, with Mike Lloyd on trumpet, Anders Berg on bass, and Peeter Uuskyla on drums. Trash Nova, their debut album, is a nine track high energy jam session, that takes the Miles' jazz rock fusion era, and adds contemporary elements to it, such as samples and tape loops. Backman uses these as a foundation for his free form compositions.
The opening track, "Gnome," is ethereal and dreamy, Backman's guitar spare and Lloyd's trumpet almost flute like, conjuring part far eastern influence and mid 70's Santana. It's clear that this just sets the stage, because the next track, "Aspen," kicks the album off proper, with Uuskyla leading the charge with a funky and rocking beat, and Backman mixing synths, guitars and Lloyd's muted horn on top. "Bon Bon" has a full out sonic drone with crushing drums, bass and guitars, but the focus, like many of the tracks, is on Lloyd, whose horn recalls Miles' technique, never over playing but accentuating and emphasizing space with minimum and efficient notes. "Nova" goes even harder, as the sound becomes a rolling thunderous sheets of sound, everyone equally pushing each other as fast and hard as possible. Rising above the din, the trumpet or guitar takes turns in soloing. It's fast and furious, but coherent. "Trash" starts of with a sitar-like solo, then Backman leading another sonic charge with a long lead improvisation, before settling down to Uuskyla's medium tempo and Lloyd's electronic enhanced trumpet playing. It's the longest track on the album, and never short on imagination.
Trash Nova is an excellent album, mixing jazz and rock effectively, without being derivative. Recommended.

Bandcamp Daily  your guide to the world of Bandcamp